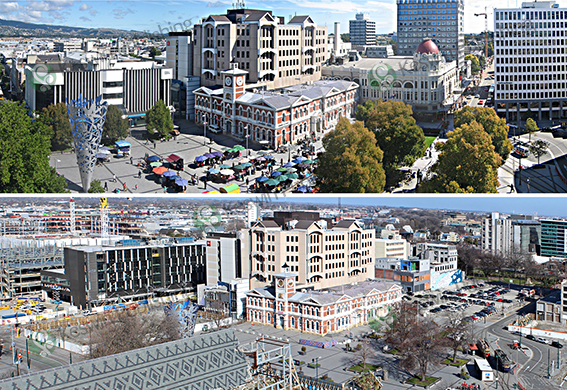 Christchurch’s Cathedral Square Then and Now. View the similarities and differences from before the 2011 earthquake to last year.

We came across these two images in our image library today and thought we’d share them with you. They give you an opportunity to see the changing face of this New Zealand City. Portions of these images were published in our latest Christchurch Comparison Photo Book.

View from the ChristChurch Cathedral Spire 2008

How many times did you climb the Cathedral Spire? If you did, the top image shows the view you’d see looking west. From left to right:

Did you ever go the market that was regularly held in the Square?

What about the food vendors? Who was your favourite?

The damage from the Christchurch 2011 Earthquake was significant. Four years later, many of the buildings visible in the 2008 photograph have been demolished.

More of Christchurch’s Cathedral Square Then and Now Photos

Our Christchurch book has more comparison images of Cathedral Square and other parts of the central city, suburbs, Sumner, Lyttelton, Akaroa, Kaiapoi and Rangiora. This is NZ$20 + S&H and can be purchased from our online store Click Here

Deb Donnell is an author who guides you on life's transformative journey. She encourages individuals to become empowered through personal development and entrepreneurship. Based in Christchurch, New Zealand, she is documenting the city's post-earthquake recovery in her best-selling book series, Christchurch NZ. She mentors individuals throughout the world to establish and build authoritative personal and business brands using the KESWIN™ Entrepreneurship System. Connect with Deb for more info.