31 July 2016 is KESWiN™ Publishing Ltd’s 10th Anniversary. Founder, Deb Donnell, reflects on the company’s journey over the past ten years.

The 10th anniversary celebrates the day I decided to incorporate my independent publishing company. The journey began a lot earlier. I decided when I was ten years old that I wanted to be a published author when I grew up. My first self-published efforts were in my teens. I produced annual calendars and monthly magazines for family and penfriends around the world.

Fast forward to my early twenties. I decided to go on my Big OE (a rite of passage for young New Zealanders, with the overseas destination usually being the UK). I arrived in England, and decided to look for work in the publishing industry. I got lucky, and ended up working for a travel guidebook publisher for two years. This gave me a great grounding in publishing.

Back in New Zealand, I spent a number of years studying writing, editing and self-publishing. The first major indie-publishing project was through my company, Jade Eagle Publishing. This was a fiction short story book, focus on transformative journeys (Trails to Treasure, 2003). It was also part of research and development for self-publishing academy vision I had in mid 2003.

Not long after this, I changed the company name to KESWiN Publishing. It was incorporated in 2006.So while it’s the 10th anniversary of incorporation, the company unofficially started in 2003.

In 2008 I co-founded an online business training centre, and taught people to write and self-publish WordPress blogs and ebooks. This was in line with my original vision for KESWiN Publishing. All was going well until February 2011. 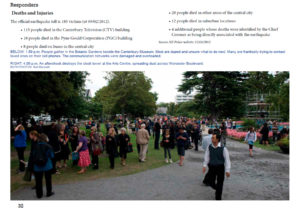 As a survivor from the Central City, I made three vows after reaching safety on 22 February 2011. I would:

At the time, I didn’t know anyone who had been killed, injured or were part of the search and rescue community. However, this changed over the next few months. KESWiN Publishing’s journey since the earthquake has been closely tied in with the vows I made on that devastating day. Our titles, Cafe Reflections: Christchurch City 1975-2012 (out of print) and Responders: The New Zealand Volunteer Response Teams Christchurch Earthquake Deployments both focused on the earthquakes, and author royalties were donated to the Christchurch Earthquake Survivors Trust.

Since then, KESWiN Publishing has focused on producing annual updates of the Christchurch Then and Now Comparison Photo Books.

This year, KESWiN Publishing has been reviewing the past and looking to its future. It will continue to update the Christchurch Then and Now Comparison Books annually, for as long as there is a demand. We are also working on Shaky Redzone’s Book of Facts Series for primary school children. This series includes books on the Christchurch Earthquake, City Demolition and Rebuild. They are narrated by a soft toy kiwi that was found in Cathedral Square after the earthquakes. Shaky spent last summer at Scot Base in Antarctica, so a book on his adventures there are also planned. You can follow Shaky Redzone on Facebook for now.

The impact of the 2011 earthquakes meant that I had to put my involvement in the online business training centre on hold. As this was part of my 2003 self-publishing academy vision, it was only a matter of time before I returned to this project. In late 2013 I set up a second company to provide publishing services to individuals and small businesses. Earlier this year Keswin Publishing began to publish guidebooks. KESWiN Academy is being launched in the last quarter of 2016. This company provides fully supported coaching and training to help individuals and small businesses establish and grow an online business presence. To learn more about our sibling company click here.

Thank you for taking the time to visit our website, and read our 10 year anniversary reflections. We invite you to take time now to look through our catalogue. You can do so by clicking here.

Get all the latest news and info sent to your inbox.